Do Pugs Get Along With Cats? 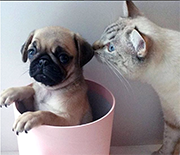 For the people who want to both own a Pug and a cat, the biggest question is whether it’s possible for them to get along. Dogs and cats are thought of as sworn enemies – which is true in most cases. Luckily, exceptions can be made.

So the short answer is: Yes, Pugs can get along with cats – but it’s not always the case.

Keep in mind that all animals have their own distinct personalities. It’s completely possible for a dog to not even get along with other dogs, let alone a cat. A lot of it depends on genetics and the breed, but the environment plays even a bigger role.

Almost any breed of dog can be raised to live alongside with cats – Pugs included. In fact, they are actually one of the easier breeds to get accustomed to their feline pals. For example:

For those reasons, Pugs can be great pets for a house with cats. The only problem that can be a big concern is cat claws. Because Pugs have a very short muzzle and big bulging eyes, it’s very easy for a cat to hit them with their claws.

For that reason, I highly suggest you don’t leave the two unattended. If something does happen then take your dog to a vet or an emergency clinic immediately. Cat claws can carry all sorts of nasty bacteria. The sooner you treat them, the higher chances of recovery.

Introducing Pugs and Cats to Each Other

When introducing any two animals for the first time, it’s always better to have two people – one person for each. Don’t worry if you don’t have anyone to help. You can still do it on your own. Since most issues start when cats feel their personal space invaded, keep the Pug on a leash so you can pull him back if necessary.

When you introduce them your job will be to watch their body language for any tension/aggression. Excitement is fine, but ideally you want them calm and relaxed. So make sure you yourself are calm, relaxed and happy.

If all goes well, let them approach and smell one another. Judging on how well things go, either let them interact with each other or end the introduction and try again the next day. Remember that it can take time for them to fully feel comfortable with each other. Don’t try to rush it. Sometimes they can hit it off right away, sometimes it can take time. Your goal is not to rush the process, but to keep it positive.

*Multiple Cats/Dogs* – If you’re introducing multiple animals to one another, it’s best to start off introducing them one by one. This is to make it easier for the new addition to the family as well as prevent the familiar pets from ganging up on the newbie.

Older animals tend to be a lot calmer and that can work in your favor. If you plan on introducing an adult Pug to an adult Cat, try to find out as much as you can about their previous history. If you’re adopting, ask the shelter whether or not they get along well with other animals. Usually they know pretty well which of their pets will best suit your home.

Introducing a Puppy or Kitten 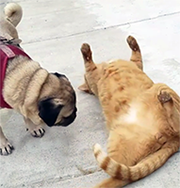 Kittens are usually harder to introduce. They are too active and aggressive when young. Being young and small they also get freaked out more easily which can cause them to attack. So be extra careful with kittens.

If you’re bringing home a Pug puppy to an adult cat however then the chances of things working out are much greater. A fully grown cat will set the boundaries pretty clear for the pup. And once the puppy understands that the cat needs personal space, he will be more respectful.

Sometimes the two animals might not be able to get along and that’s fine. It’s just not meant to be. If it’s very obvious the animals hate each other, then end it. If all you hear is hissing and growling, then there is no point in continuing this forward. Even if you do get them to get along, there can be a lot of resentment between the two.

Some hissing or weak swiping from the cat is normal though (again you have to be careful about eyes). Pugs can be a little too friendly, and cats don’t usually like it. Let the cat express his or her limits and watch how the Pug reacts. If he learns and backs off, then it’s a good sign that things will work out well in the future.

Pretty soon the cat will learn he can boss the little Pug around. Which actually will work out in your favor since it will be the cat teaching the Pug to respect his boundaries instead of you. 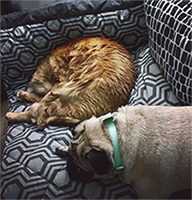 Since cats and dogs are not natures perfect mix, you will need to establish a few house rules to make their relationship work. Here are a few tips to help you out with that:

Make sure your cat always has a safe space – By safe space I mean a designated area where the cat can escape to be left alone by the Pug. It can be a room, a spot up high or a blocked off area that only the cat can get to. Ideally when they are getting adjusted to each other, there should be a safe space in every room. Since pugs are short, setting up a place that they can’t reach shouldn’t be too much of a problem.

Teach a clear “stop” command to your Pug – As you already know, obedience training is a must for any dog. Make sure there is a clear command to stop the Pug from chasing the cat around.

Keep the cat above your Pug on the dominance hierarchy – Cats tend to keep to themselves and a lot of problems can be avoided if they are higher on the hierarchy. Since cats pose more danger to little Pugs, it’s better that they call the shots. One easy way to reinforce this is by feeding your cat first.

Supervise them during feeding time – This is the most likely time for them to have a disagreement. Either separate them when feeding or monitor them closely.

Have any other house rules to recommend or just want to share your experience with owning both cat(s) and Pug(s)? Leave a comment below for others!

NEXT: If you own a Pug, you NEED to know this!