Pugs are the type of dogs that are ready to play and have fun with you whenever you’re in the mood. Pug puppies however don’t care if you’re ready or not. All they care about is having fun. To them it doesn’t matter if you’re busy, tired or not in the mood. They are in the mood and that’s what matters.

If you ever seen two puppies play then you already know how rough, mean and aggressive those games can look (while being super adorable at the same time). One pup will chase the other one growling, one will be barking his little head off in his very non-threatening voice while the other will chase his siblings around biting him and tugging him by his ears.

Judging by the kind of games they play, it’s hard to be surprised when you see your own puppy growling, chasing and nipping at you. At their very core they still have those predatory instincts that come out to the surface.

Why your puppy is biting you 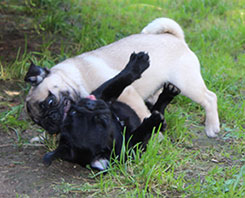 I know it’s hard to imagine your Pug as a wild predatory animal, and he really isn’t anymore. However the instincts to chase down prey, growl in the face of danger and attack their enemies is deeply ingrained in him. Just like little kids like to play games where they pretend to be adults, your little guy is doing exactly the same thing.

The problem isn’t even in growling, biting or chasing. I bet when your little guy was even younger, you would have had no problem with him biting you with his little teeth because you could barely feel it. However as he got older, those little teeth got bigger, the biting started to hurt more and outrunning your Pug puppy took a bit more effort.

Puppies teach each other when to stop biting

If left amongst his peers, your puppy would have outgrown his behavior as he got older at the very least he would have learned to take it easy with the aggression. But he wouldn’t be able to do that on his own. His siblings and his parents would be the ones teaching him when enough is enough.

When two puppies are playing a game and one of them bites the other one too hard, the first puppy won’t just take it and continue on with the game. The pup will either yelp out or just stop playing with the aggressive one. It’s similar to how little kids would ignore other kids that they don’t want to play with.

At first the biter might not even realize why his pal suddenly changed his mind, but when more of his siblings stop playing with him after he nips too hard he will realize that something is up. He will have to learn that if he wants to keep playing games with his buddies, he will have to play much nicer.

Teaching your own Pug to stop biting during playtime isn’t that much different from how puppies do it amongst each other. All you have to do is show him that if he wants to continue playing with you, he has to keep his sharp teeth off you and your clothes. Otherwise he will have to play all by himself, and we all know that there is no fun in that.

Puppies biting their owners while playing have been a problem ever since people kept dogs as housepets. Since then, people have developed all kinds of ways to discourage a puppy that likes to play with his teeth, but I’m just going to share with you the top 3 easiest ways that should do the trick:

1. Stop the games whenever your puppy bites you – Just simply stop everything, turn away from him and go about your business while ignoring him. As soon as he realizes that using his teeth during playtime will lose your attention, he will find other ways to keep you interested.

2. Yelp or shout to alarm him whenever things get too rough – You know how I talked about puppies yelping when things get too rough? Well they do that because it’s a really effective way to let the other puppy know when they crossed the line. Sometimes ignoring them just isn’t enough.

3. Teach him other type of games to play – You can play all kinds of interesting games with your Pug that don’t involve any roughhousing. The only problem though is that you have to teach him those games first. Your little guy only knows how to play with dogs, so teach him games that he can play with humans.

If you apply all three of the tips listed above, you will be on the right path to finally stopping your puppies biting. Remember that whenever you teach your Pug anything, it’s a lot more effective if you’re consistent with whatever it is that you want him to learn.

It’s also a good idea to let your family and friends know how to properly respond to your puppy’s rough playing so that he can learn much quicker. If everyone around him changes how they play games with him, he will have no choice but to change along with them.

Watch out for aggressive behavior

Sometimes puppies bite for other reasons than just playing. The suggestions above apply mostly to just play biting. Although most of the time when a puppy bites he is doing it playfully, there are exceptions to everything. Other reasons for your puppy to bite you might include:

Remember that if you’re dealing with an aggressive or defensive dog and you’re not sure how to handle the situation properly, it’s better to step back until you’re ready. A lot can go wrong if you approach a dog that has shown warning signs for you to back off. Aggravating them further won’t do any good for anyone.

For an in depth guide to Pug personality, behavior and training I suggest you check out the Pug Perfect book if you haven’t already.