Pug Having a Panic/Anxiety Attack? 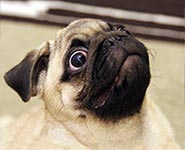 Believe it or not but most dogs will have or already had panic attacks (or anxiety attacks as some call them) at some point in their lives. Sometimes the owner might not even notice their dog is having a panic attack, and just assumes it’s something else. For those of us that do notice it, the experience can be quite frightening. No one wants to see their beloved Pug go into such a stressful mental state.

Symptoms of a Panic Attack

How can you tell if your Pug is having a panic attack and not something else? Well the easiest way to tell if it’s a panic attack is by reading his body language. Watch your Pugs behavior for symptoms of panic or anxiety that might include..

Of course just because your Pug is worried about something doesn’t mean that you should be as well. A man dressed in strange blue clothes walking from door to door leaving funny smelling boxes might be a warning sign to a Pug that never seen such thing happen before. However to you the stranger is clearly a mailman just doing his job. So not every panic attack that your dog might have is a worry for concern, but sometimes it very well could be.

Common reasons for a panic attack

Here are just a few reasons that could cause your Pug to have a panic attack:

Loud noises – thunder, the vacuum cleaner, fireworks and loud cars outside can all seem scary to our little guys that might not fully understand them.

Strangers – this is especially common in Pugs that haven’t been socialized properly at an early age. They simply aren’t used to meeting new people or animals. So whenever someone new comes around, they immediately assume they are a threat.

Car rides – while most dogs might love going on car rides, unfortunately there are a few that are terrified by them. It’s easy for your Pug to lose his balance in them and the noise coming from the engine doesn’t sound too friendly.

Loneliness – Even people can get anxious or nervous when left all by themselves for a long period of time. You see this happen with little kids all the time. So it’s no surprise that your little Pug might feel the same when he doesn’t have anyone familiar around him.

How to Deal with a Panic Attack

Not all panic attacks are equal, therefore your appropriate reaction can be different depending on the source of the attack. But before we even get into that, let’s talk about what you shouldn’t do first.

Don’t feed your pug’s anxiety – It’s never good to panic, even if something serious has happened or is about to happen. If your Pug sees that you’re going into a panic attack with him then he will get worked up even more. So try to remain as calm and collective as possible.

Don’t scold or punish your dog – Yes I know, it’s frustrating to see your Pug running around barking and whining every time there is a storm outside. However it doesn’t mean you should yell our shout at him to keep him quiet. Trust me, it won’t help. If anything it will only make him even more anxious.

What you should do instead

Stay calm and relaxed – Your actions speak louder than words. This is especially true when dealing with pretty much all animals, and your pug is no different.

Acknowledge their worries – Some people actually think they should completely ignore their dogs during a panic attack, but that’s not exactly true. In most cases it’s actually good to let your Pug know that you see his concern, you just have to remain calm while doing so. This can be as simple as looking out the window when there is a loud noise outside and then returning back to what you were doing. When your Pug sees this, he will know that you too have heard the noise and after checking it out you found no real threat. So he will feel much safer now.

Find something to distract him – Again, this isn’t true for all panic attacks but sometimes it’s actually good to get their mind off things to relieve some of the anxiety. For example if your Pug gets anxious home alone, you can use toys to keep his mind distracted. That way instead of panicking and chewing up your stuff, he can play with his toys while you’re gone.

How to Reduce Panic Attacks

The best solution to panic attacks is to prevent them from happening in the first place. Of course you can’t control everything so it’s not a bullet-proof solution, but it’s a good start for attacks that are triggered by things that you actually do have control over.

Figure out what’s causing your Pug’s panic attack and then try to help him overcome his fear and anxiety over it. If he is scared of meeting new people, try to socialize him better. If he gets anxious when left home alone, find ways to keep him entertained while you’re gone – and so on. Don’t be pushy about it, but try your best to make him feel more comfortable about the things that cause your Pug to panic.

You can learn more about Pug training, care and health by reading this book about Pugs.

4 Responses to “Pug Having a Panic/Anxiety Attack?”